by admin
in News

BMW deserves credit for popularising the two-door, four-seater sports car when it introduced the 2002 performance saloon in 1968. With its distinctively neat three-box styling, sharp handling and spirited performance, the two-litre car was an instant hit. Today, the BMW 2002 is a much sought-after classic and there are a few very nice ones on our roads.

Although BMW calls it a coupe, the new M240i is very much the spiritual successor to the famous 2002 – now with a separate boot and brilliant performance. Being based on the 3 and 4-Series, it is longer and wider than its predecessor, the M235i. In fact, its interior styling is almost identical to its more expensive siblings and built to the same high-quality standards. Until the range- topping M2 arrives in Singapore, this is the top performer in the 2-series model range. It is also the only version that is available with four-wheel-drive as standard.

Perhaps not what one might call a conventionally head-turning car, the M240i is nonetheless neatly styled and muscular looking. Overall, the M240i is from every angle unmistakably a BMW, which is the first thing that would make the enthusiast happy.

Being an M Performance vehicle, this car also comes with a specially crafted front bumper that has extra-large air-intakes, deep gloss-black side skirts along the sills, and a rear diffuser between twin trapezoidal tail pipes. It makes a visual impact as a seriously sporty motorcar, setting it apart from any other 2-series. But what every red-blooded petrolhead is eager to know is what lies under the bonnet and how BMW has honed this car’s suspension.

For decades, BMW has produced some of the finest inline six-cylinder engines ever to power a passenger vehicle. These days, of course, BMW inline sixes are all turbo- charged like the one in this M240i. Displacing 2,998cc, the engine delivers some impressive power and torque numbers. Torque peaks at a whopping 500Nm as low down as 1,900rpm and stays constant all the way to 5,000rpm. Meanwhile maximum power of 374hp arrives at 5,500rpm and maintains right up to 6,500rpm.

This is an incredibly delightful engine, so smooth and cultured that you’d never realise how fast you are going. If you are ever in a mood to sprint from rest, preferably when you have driven out of Singapore, just remember that in a mere 4.3 seconds the M240i will reach a speed of 100km/h.

An eight-speed automatic gearbox shifts with uncanny smoothness and quicker than most drivers could change gears in a manual gearbox, making the sprint an easy task. 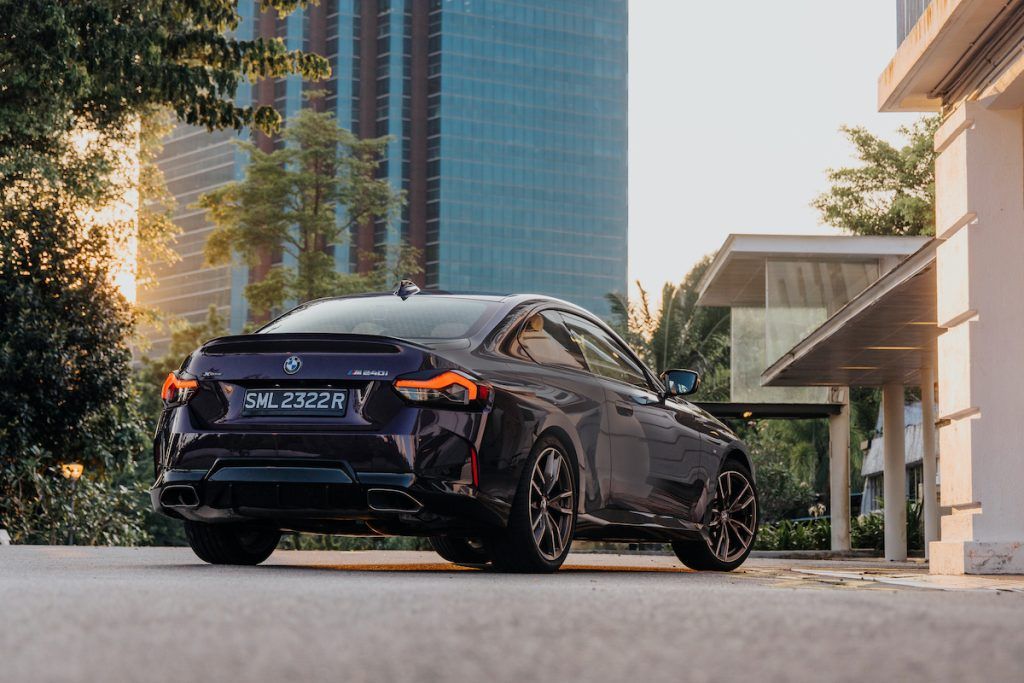 BMW chassis engineers may be a bunch of nerds, but they are awfully good at what they do and it appears they are great drivers too. Although the car rides firmly in gentle city driving, the polished drivetrain adds to the overall passenger comfort. Take on a more aggressive driving style, and the engine and chassis will reward any driver. Response from the three-litre is instantaneous while grip from the four- wheel drive system is phenomenal, providing traction at all times in the dry or wet.

The driver has the option of selecting different driving modes to suit the type of roads, conditions, and more importantly, his or her driving ability. In any case, xDrive always delivers optimum traction between front and rear wheels, and one would have to be deliberately brutal to cause an oversteer moment.

In these days of oversized SUVs and electrified passenger cars, it is indeed a pleasure to have a vehicle like the M240i on the price list. A premium performance car with a turbocharged inline six-cylinder petrol engine, honed by BMW’s M-Division, is probably the last of its kind before electric mobility takes over. The upcoming full-on M2 will likely be quicker and possess even sharper handling, but it will surely be more expensive – which just about makes the M240i something of a bargain and a future classic like its ancestor the BMW 2002.

15 Gourmet Gift Baskets That Can Ship in 24 Hours

Ariana Grande’s Tattoos and Their Meanings